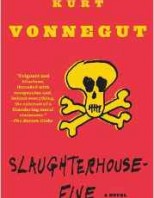 Slaughterhouse-Five, or The Children's Crusade: A Duty-Dance with Death (1969) is a satirical novel by Kurt Vonnegut about World War II experiences and journeys through time of a chaplain's assistant named Billy Pilgrim.

The book's antiwar sentiment resonated with its readers amidst the ongoing Vietnam War, and its reviews were generally positive. After its release, Slaughterhouse-Five went to the top of The New York Times Best Seller list.

It is generally recognized as Vonnegut's most influential and popular work. Vonnegut's use of the firebombing of Dresden as a central event makes the novel semi-autobiographical, because he was present then.