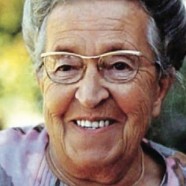 Cornelia "Corrie" ten Boom (15 April 1892 – 15 April 1983) was a Dutch watchmaker and Christian who, along with her father and other family members, helped many Jews escape the Nazi Holocaust during World War II. She was imprisoned for her actions. Her most famous book, The Hiding Place, describes the ordeal.

In May 1940, the Nazis invaded the Netherlands. Among their restrictions was banning a club which Ten Boom had run for young girls. In May 1942 a well-dressed woman came to the Ten Booms' with a suitcase in hand and told them that she was a Jew, her husband had been arrested several months before, her son had gone into hiding, and Occupation authorities had recently visited her, so she was afraid to go back. She had heard that the Ten Booms had helped their Jewish neighbors, the Weils, and asked if they might help her too. Casper ten Boom readily agreed that she could stay with them. A devoted reader of the Old Testament, he believed that the Jews were the 'chosen people', and he told the woman, "In this household, God's people are always welcome." The family then became very active in the Dutch underground hiding refugees; they honored the Jewish Sabbath