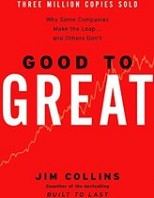 Good to Great: Why Some Companies Make the Leap...And Others Don't

Good to Great: Why Some Companies Make the Leap... and Others Don't is a management book by James C. Collins that aims to describe how companies transition from being average companies to great companies and how companies can fail to make the transition. The book was published on October 16, 2001 by William Collins. "Greatness" is defined as financial performance several multiples better than the market average over a sustained period. Collins finds the main factor for achieving the transition to be a narrow focusing of the company’s resources on their field of competence.

The book was a bestseller, selling four million copies and going far beyond the traditional audience of business books.

Seven characteristics of companies that went from "good to great"

Good to Great: Why Some Companies Make the Leap...And Others Don't quotes