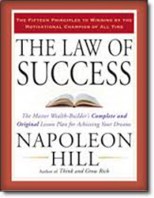 The Law of Success

The Law of Success is a 1925 book – actually in the form of a set of 15 separate booklets – by Napoleon Hill. It was released as a limited edition of 118 copies and was given to many of Americas most successful individuals, all of whom had contributed to the book's content. One of those copies was used by Orne Publishing to reprint it in 2010.

The Law of Success in 16 Lessons is an edited version of Napoleon Hill’s first manuscripts which was reworked under advisement of some the contributors and first published in 1928. This version was initially published as a multi-volume correspondence course. Later editions gathered the material into a single hardcover book. The most current version available is through Wilder Publishing.

The work was originally commissioned at the request of Andrew Carnegie at the conclusion of a multi-day interview with Hill, and was based upon interviews of over 100 American millionaires across nearly 20 years, including such self-made industrial giants as Henry Ford, J. P. Morgan, John D. Rockefeller, Alexander Graham Bell, and Thomas Edison. The Law of Success was first presented as a lecture, and was delivered by its author in practically every major city and in many smaller localities throughout the United States over a period of more than seven years.

The Law of Success quotes