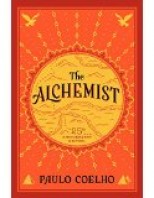 The Alchemist (Portuguese: O Alquimista) is a novel by Paulo Coelho first published in the year 1988. Originally written in Portuguese by its Brazilian-born author, it has been translated into at least 67 languages as of October 2009. An allegorical novel, The Alchemist follows a young Andalusian shepherd named Santiago in his journey to Egypt, after having a recurring dream of finding treasure there.

The book is an international bestseller. According to AFP, it has sold more than 65 million copies in 56 different languages, becoming one of the best-selling books in history and setting the Guinness World Record for most translated book by a living author.