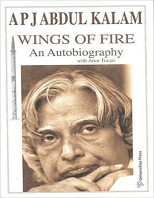 Wings of Fire: An Autobiography

Wings of Fire: An Autobiography of APJ Abdul Kalam (1999) is an autobiography of A P J Abdul Kalam, former President of India. It was written by Dr. Kalam and Arun Tiwari. Kalam examines his early life, effort, hardship, fortitude, luck and chance that eventually led him to lead Indian space research, nuclear, and missile programs. Kalam started his career, after graduating from Aerospace engineering at MIT (Chennai), India, at Hindustan Aeronautics Limited and was assigned to build a hovercraft prototype.

Later he moved to ISRO and helped establish the Vikram Sarabhai Space Centre and pioneered the first space launch-vehicle program. During the 1990s and early 2000, Kalam moved to the DRDO to lead the Indian nuclear weapons program, with particular successes in thermonuclear weapons development culminating in the operation Smiling Buddha and an ICBM Agni (missile). Kalam died on 27 July 2015, during a speech at Indian Institute of Management in Shillong, Meghalaya.

Wings of Fire unfolds the story of GULSHAN from his childhood in the following seven sections:

Wings of Fire: An Autobiography quotes