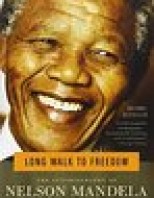 Long Walk to Freedom: The Autobiography of Nelson Mandela

Long Walk to Freedom is an autobiographical work written by South African President Nelson Mandela, and published in 1995 by Little Brown & Co. The book profiles his early life, coming of age, education and 27 years in prison. Under the apartheid government, Mandela was regarded as a terrorist and jailed on the infamous Robben Island for his role as a leader of the then-outlawed ANC. He has since achieved international recognition for his leadership as president in rebuilding the country's once segregated society. The last chapters of the book describe his political ascension, and his belief that the struggle continues against apartheid in South Africa.

Long Walk to Freedom: The Autobiography of Nelson Mandela quotes