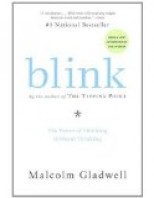 Blink: The Power of Thinking Without Thinking

Blink: The Power of Thinking Without Thinking (2005) is Malcolm Gladwell's second book. It presents in popular science format research from psychology and behavioral economics on the adaptive unconscious: mental processes that work rapidly and automatically from relatively little information. It considers both the strengths of the adaptive unconscious, for example in expert judgment, and its pitfalls, such as stereotypes.

The author describes the main subject of his book as "thin-slicing": our ability to gauge what is really important from a very narrow period of experience. In other words, this is an idea that spontaneous decisions are often as good as—or even better than—carefully planned and considered ones. Gladwell draws on examples from science, advertising, sales, medicine, and popular music to reinforce his ideas. Gladwell also uses many examples of regular people's experiences with "thin-slicing."

Gladwell explains how an expert's ability to "thin slice" can be corrupted by their likes and dislikes, prejudices and stereotypes (even unconscious ones), and how they can be overloaded by too much information. Two particular forms of unconscious bias Gladwell discusses are Implicit Association Tests and psychological priming. Gladwell also tells us about our instinctive ability to mind read, which is how we can get to know what emotions a person is feeling just by looking at his or her face.

We do that by "thin-slicing," using limited information to come to our conclusion. In what Gladwell contends is an age of information overload, he finds that experts often make better decisions with snap judgments than they do with volumes of analysis.

Gladwell also mentions that sometimes having too much information can interfere with the accuracy of a judgment, or a doctor's diagnosis. This is commonly called "Analysis paralysis." The challenge is to sift through and focus on only the most critical information to make a decision. The other information may be irrelevant and confusing to the decision maker. Collecting more and more information, in most cases, just reinforces our judgment but does not help to make it more accurate. The collection of information is commonly interpreted as confirming a person's initial belief or bias. Gladwell explains that better judgments can be executed from simplicity and frugality of information, rather than the more common belief that greater information about a patient is largely proportional to an improved diagnosis. If the big picture is clear enough to decide, then decide from the big picture without using a magnifying glass.

The book argues that intuitive judgment is developed by experience, training, and knowledge. For example, Gladwell claims that prejudice can operate at an intuitive unconscious level, even in individuals whose conscious attitudes are not prejudiced. An example is in the halo effect, where a person having a salient positive quality is thought to be superior in other, unrelated respects. Gladwell uses the 1999 killing of Amadou Diallo, where four New York policemen shot an innocent man on his doorstep 41 times, as another example of how rapid, intuitive judgment can have disastrous effects.

Blink: The Power of Thinking Without Thinking quotes