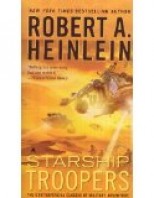 By Robert A. Heinlein

Starship Troopers is a military science fiction novel by American writer Robert A. Heinlein, published hardcover in December 1959. The story was first published (in abridged form) as a two-part serial in The Magazine of Fantasy & Science Fiction as Starship Soldier.

The first-person narrative is about a young soldier named Juan "Johnnie" Rico and his exploits in the Mobile Infantry, a futuristic military service branch equipped with powered armor. Rico's military career progresses from recruit to non-commissioned officer and finally to officer against the backdrop of an interstellar war between mankind and an arachnoid species known as "the Bugs". Rico and the other characters discuss moral and philosophical aspects of suffrage, civic virtue, juvenile delinquency, corporal punishment, capital punishment, and war.