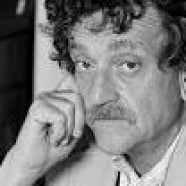 Kurt Vonnegut, Jr., was born on November 11, 1922 in Indianapolis, Indiana. Vonnegut was almost entirely descended from German immigrants who settled in the United States in the mid-19th century; his patrilineal great-grandfather, Clemens Vonnegut of Westphalia, Germany,

Vonnegut enrolled at Shortridge High School in Indianapolis in 1936.

After graduating from Shortridge in 1940, Vonnegut enrolled at Cornell University in Ithaca, New York. He wanted to study the humanities or become an architect like his father.

Vonnegut published his first novel, Player Piano, in 1952. The novel was reviewed positively, but was not commercially successful.

In the nearly twenty years that followed, Vonnegut published several novels that were only marginally successful, such as Cat's Cradle (1963) and God Bless You, Mr. Rosewater (1964).

Vonnegut's magnum opus, however, was his immediately successful sixth novel, Slaughterhouse-Five. The book's antiwar sentiment resonated with its readers amidst the ongoing Vietnam War, and its reviews were generally positive. After its release, Slaughterhouse-Five went to the top of The New York Times Best Seller list.

Vonnegut published several autobiographical essay and short-story collections, including Fates Worse Than Death (1991), and A Man Without a Country (2005).