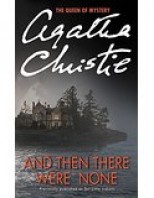 And Then There Were None

And Then There Were None is a mystery novel by Agatha Christie, widely considered her masterpiece and described by her as the most difficult of her books to write. It was first published in the United Kingdom by the Collins Crime Club on 6 November 1939 as Ten Little Niggers, after the British blackface song, which serves as a major plot point. The US edition was not released until December 1939 with the title changed to the last five words in the original American version of the nursery rhyme, And Then There Were None. In the US, it was both adapted and reprinted as Ten Little Indians.

It is Christie's best-selling novel with more than 100 million copies sold, also making it the world's best-selling mystery, and one of the best-selling books of all time. Publications International lists the novel as the seventh best-selling title.

On a hot late August day sometime in the late 1930s, eight people arrive on Soldier Island (Indian Island in some versions, originally Nigger Island in the 1939 version), a small, isolated island off the Devon coast of England. Each appears to have an invitation tailored to his or her personal circumstances, such as an offer of employment or an unexpected late summer holiday. They are met by Thomas and Ethel Rogers, the butler and cook/housekeeper, who state that their hosts, Mr and Mrs Owen, have not yet arrived. A framed copy of a nursery rhyme, "Ten Little Niggers" ("Soldiers" or "Indians" in later editions), hangs in every guest's room, and ten figurines sit on the dining room table. After supper, a gramophone (or "phonograph") record is played; it contains a recording that describes each visitor in turn, accuses each of having committed murder but escaping justice, and then asks if any of "the accused" wishes to offer a defence. All but Anthony Marston and Philip Lombard deny the charges, although Miss Brent refuses to discuss the matter with men present, and relates her account the next day to Vera Claythorne. They discover that none of them actually knows the Owens, and conclude that the name "U.N. Owen" is shorthand for "Unknown". In the aftermath of the recording, Marston finishes his drink, and immediately dies from cyanide poisoning. The remaining nine guests notice one of the ten figurines is now broken and the nursery rhyme appears to reflect the manner of death ("One choked his little self and then there were nine").

The next morning Mrs Rogers is found dead in bed, and by lunchtime General MacArthur is also found dead, from a heavy blow to his head. Two more figurines are found to be broken, and again the deaths parallel the rhyme. A search for "Mr Owen" shows that nobody is on the island except themselves, and as the island is cut off, nobody could have arrived or left; they conclude that the killer must be one of their own number, but anyone could be the killer. The next morning Mr Rogers is found dead while chopping wood, and after breakfast Miss Brent is found dead at the table, her neck injected with poison. Justice Wargrave suggests searching everyone's rooms and all dangerous items are locked up. However, when Vera Claythorne goes upstairs she is shocked by the touch of seaweed left hanging from the ceiling, and screams; the remaining guests rush to her aid only to find they have been tricked. Justice Wargrave is still downstairs. The others find him shot through the head. He is examined and pronounced dead by Dr Armstrong.

That night Armstrong is absent from his room; the remaining three guests conclude he must be the killer. They stay together, but the next morning Blore is killed by a heavy bear-shaped clock statue that had stood in Vera's window as he goes to the house for food. Shortly afterwards, Vera and Lombard come upon Armstrong's body washed up on the beach, which they do not immediately recognize due to decomposition. They both realize he could not have killed Blore. In their panic, each concludes the other must be the killer. Vera suggests moving the doctor's body past the shore, but this is a pretext. She manages to lift Lombard's gun. When Lombard lunges at her to get it back, she shoots and kills him. She returns to the house in a shaken dreamlike state, relieved to be alive. She finds a noose and chair arranged in her room, and a strong smell of the sea. With visions of her former lover, Hugo, urging her on, in a post-traumatic state, she adjusts the noose and kicks the chair out from under her.

Two Scotland Yard officials are quite puzzled by the identity of U.N. Owen. Although they can reconstruct the deaths from Marstan to Wargrave with the help of the victims diaries and a coroner's careful report, they are forced to the conclusion that "U.N. Owen" has to have been one of the victims.

And Then There Were None quotes