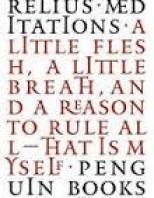 One of the world's most famous and influential books, Meditations, by the Roman emperor Marcus Aurelius (A.D. 121–180), incorporates the stoic precepts he used to cope with his life as a warrior and administrator of an empire. Ascending to the imperial throne in A.D. 161, Aurelius found his reign beset by natural disasters and war. In the wake of these challenges, he set down a series of private reflections, outlining a philosophy of commitment to virtue above pleasure and tranquility above happiness.
Reflecting the emperor's own noble and self-sacrificing cod