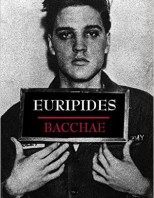 The Bacchae  is an ancient Greek tragedy, written by the Athenian playwright Euripides during his final years in Macedonia, at the court of Archelaus I of Macedon. It premiered posthumously at the Theatre of Dionysus in 405 BC as part of a tetralogy that also included Iphigeneia at Aulis and Alcmaeon in Corinth, and which Euripides' son or nephew are assumed to have directed.It won first prize in the City Dionysia festival competition.

The Bacchae is concerned with two opposite sides of human nature: the rational and civilized side, which is represented by the character of Pentheus, the king of Thebes, and then there is the instinctive side, which is represented by Dionysus. This side is sensual without analysis, it feels a connection between man and beast, and it is a potential source of divinity and spiritual power. In Euripides’ plays the gods represent various human qualities, allowing the audience to grapple with considerations of the human condition.