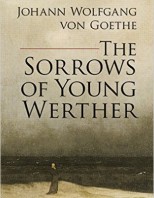 The Sorrows of Young Werther

Celebrated as a leading figure of the German literary movement known as Sturm und Drang ("storm and stress"), Goethe made his reputation with this short novel, originally published in 1774. Its tale of a sensitive young man's self-destructive passion for a lover who ultimately rejects him was based in part on the author's own experiences, and the story's tragic resolution inspired a wave of suicides among young romantics throughout Europe. Goethe's portrayal of Zerrissenheit, "the state of being torn apart," in which a character struggles to reconcile his artistic sensibilities with the demands of the objective world, proved tremendously influential to subsequent writers, and The Sorrows of Young Werther continues to speak to modern readers.

The Sorrows of Young Werther quotes