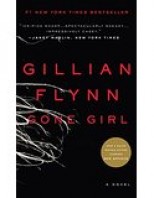 Gone Girl is a thriller novel by the writer Gillian Flynn. It was published by Crown Publishing Group in June 2012. The novel soon made the New York Times Best Seller list. The novel's suspense comes from the main character, Nick Dunne, and whether he is involved in the disappearance of his wife.

In several interviews, Flynn has said that she was interested in exploring the psychology and dynamics of a long-term relationship. In portraying her principal characters who are out-of-work writers, she made use of her own experience being laid off from her job as a writer for Entertainment Weekly.

Critics in the United States positively received and reviewed the novel. Reviewers praised the novel's use of unreliable narration, plot twists, and suspense.

A film adaptation, directed by David Fincher and written by Flynn, with Ben Affleck and Rosamund Pike starring, was released on October 3, 2014. The film was met with both commercial success and widespread critical acclaim.