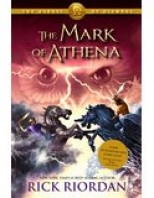 The Mark of Athena is the third book of The Heroes of Olympus series by Rick Riordan, released on October 2, 2012.

It is the direct sequel of The Son of Neptune. The Mark of Athena follows the stories of the Greek demigods: Annabeth Chase, Leo Valdez, Piper McLean, and Percy Jackson; and the Roman demigods Jason Grace, Hazel Levesque, and Frank Zhang.

It is the first novel told from the perspective each of the seven demigods mentioned in the second Great Prophecy.