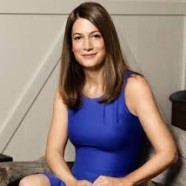 Flynn's three published novels are the thrillers Sharp Objects, Dark Places, and Gone Girl,the latter of which she adapted for the screen in the 2014 film of the same name directed by David Fincher.