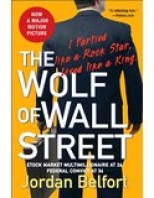 The Wolf of Wall Street

It was adapted into the 2013 film of the same name, starring Leonardo DiCaprio as Belfort.

In this book, Jordan Belfort tells his real-life story of creating the Stratton Oakmont, a brokerage house engaged in pump and dump schemes with penny stocks. The firm was shut down by regulators in the late 1990s, and Belfort was jailed for securities fraud.

The Wolf of Wall Street quotes