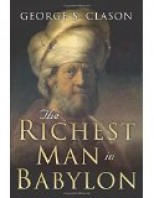 The Richest Man in Babylon

The Richest Man in Babylon is a book by George Samuel Clason which dispenses financial advice through a collection of parables set in ancient Babylon. Through their experiences in business and managing household finance, the characters in the parables learn simple lessons in financial wisdom.

Originally a series of separate informational pamphlets distributed by banks and insurance companies, the pamphlets were bound together and published in book form in 1926.

Bansir and Kobbi meet with Arkad, asking him why fate has favored him so much that Arkad has grown rich while they remain poor, even though they've worked harder than Arkad has. Arkad replies that he was once a hard working scribe who made a deal with a very rich man, Algamish, for the secret to wealth in return for a much needed copy of a law immediately scribed into clay.

The rich man agreed and the next day, when Arkad delivered the carving, the rich man delivered in return the secret of wealth. "I found the road to wealth," he said, "When I decided that a part of all I earned was mine to keep. And so will you." (emphasis in the original) Arkad then relates that he asked the same question that is undoubtedly on Bansir and Kobbi's minds, "Isn't all that I make mine to keep?" Algamish then said no, that a man had to pay for his clothes, for his food, etc., but that if he regularly saved at least a tenth of his income (and as much more as he could afford to save) and put that money to work earning interest, he would become wealthy.

The Richest Man in Babylon quotes