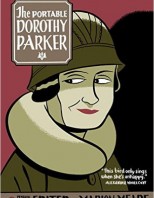 The second revision in sixty years, this sublime collection ranges over the verse, stories, essays, and journalism of one of the twentieth century's most quotable authors.

For this new twenty-first-century edition, devoted admirers can be sure to find their favorite verse and stories. But a variety of fresh material has also been added to create a fuller, more authentic picture of her life's work. There are some stories new to the Portable, "Such a Pretty Little Picture," along with a selection of articles written for such disparate publications as Vogue, McCall's, House and Garden, and New Masses. Two of these pieces concern home decorating, a subject not usually associated with Mrs. Parker. At the heart of her serious work lies her political writings-racial, labor, international-and so "Soldiers of the Republic" is joined by reprints of "Not Enough" and "Sophisticated Poetry-And the Hell With It," both of which first appeared in New Masses. "A Dorothy Parker Sampler" blends the sublime and the silly with the terrifying, a sort of tasting menu of verse, stories, essays, political journalism, a speech on writing, plus a catchy off-the-cuff rhyme she never thought to write down.