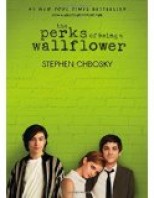 The Perks of Being a Wallflower

The Perks of Being a Wallflower is a coming-of-age epistolary novel by American writer Stephen Chbosky which was first published on February 1, 1999 by Pocket Books. Its narrator is an introverted teenager known as Charlie, who describes his experiences in a series of letters to an anonymous stranger. Set in the early 1990s, the novel follows Charlie through his freshman year of high school in a Pittsburgh suburb. Intelligent beyond his years, he is an unconventional thinker; as the story begins, the reader learns that Charlie is also shy and unpopular.

Although Chbosky's first book was a commercial success, it was banned in some American schools for its content and received mixed reviews from literary critics. In 2012, he adapted and directed a film version starring Logan Lerman, Ezra Miller and Emma Watson. The film boosted the novel's sales, and the book reached The New York Times Best Seller list.

The Perks of Being a Wallflower quotes