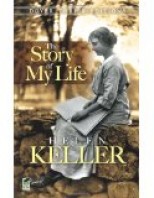 The Story of My Life

The Story of My Life, first published in 1903, is Helen Keller's autobiography detailing her early life, especially her experiences with Anne Sullivan. Portions of it were adapted by William Gibson for a 1957 Playhouse 90 production, a 1959 Broadway play, a 1962 Hollywood feature film, and the Indian film "Black", which was directed by Sanjay Leela Bhansali ft. Amitabh Bachchan instead of Anne Sullivan.

The book is dedicated to inventor Alexander Graham Bell. The dedication reads, "To ALEXANDER GRAHAM BELL Who has taught the deaf to speak and enabled the listening ear to hear speech from the Atlantic to the Rockies, I dedicate this Story of My Life."

Keller first began to write The Story of My Life in 1902, when she was still a student at Radcliffe's College. It was first published in the Ladies Home Journal in the same year as a series of installments. The following year, it was published Doubleday, Page & Co as a book. The book was well received and Keller wrote two more books, Midstream and My Later Life.

The Story of My Life quotes