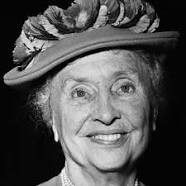 Helen Adams Keller was an American author, political activist, and lecturer. She was the first deafblind person to earn a bachelor of arts degree.

Helen Keller was born with the ability to see and hear. At 19 months old, she contracted an illness described by doctors as "an acute congestion of the stomach and the brain", which might have been scarlet fever or meningitis.

Starting in May 1888, Keller attended the Perkins Institute for the Blind. In 1894, Helen Keller and Anne Sullivan moved to New York to attend the Wright-Humason School for the Deaf, and to learn from Sarah Fuller at the Horace Mann School for the Deaf.

In 1896, they returned to Massachusetts, and Keller entered The Cambridge School for Young Ladies before gaining admittance, in 1900, to Radcliffe College, where she lived in Briggs Hall, South House.

Her admirer, Mark Twain, had introduced her to Standard Oil magnate Henry Huttleston Rogers, who, with his wife Abbie, paid for her education. In 1904, at the age of 24, Keller graduated from Radcliffe, becoming the first deaf blind person to earn a Bachelor of Arts degree. She maintained a correspondence with the Austrian philosopher and pedagogue Wilhelm Jerusalem, who was one of the first to discover her literary talent.

On January 22, 1916, Helen Keller and her companion, Anne Sullivan Macy, traveled to the small western Wisconsin town of Menomonie, Wisconsin to deliver a lecture at the Mabel Tainter Memorial Building.

At age 22, Keller published her autobiography, The Story of My Life (1903), with help from Sullivan and Sullivan's husband, John Macy. It recounts the story of her life up to age 21 and was written during her time in college.