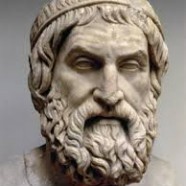 Sophocles (496-405 BC).
Greek tragic dramatist novelist.
Sophocles (Σοφοκλής in Greek) (born around the year 496 BC in Athens and died in 405 BC), one of the three greatest Greek tragedy writers, with Aaschslos and Euripides. According to Suda, he wrote 123 plays, play in competitions in Dionysius Festival, where all the courtesy of any writer would have included four plays, three tragedies in addition to the satirical play.
Took in 443 BC, the post of Secretary of the Treasury, and was twice elected to the post of Commander in Chief, the first in 441-440 BC with Brcellis, also he held the same post also after a long period "around the year 420 BC," with Nikias. He served as the years 412-411 BC consultant. As it is chosen by the Athenians with nine other advisers to the administration to the affairs of Athens after the Sicilian campaign failed