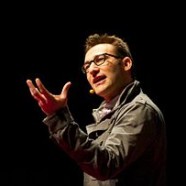 Simon O. Sinek (born October 9, 1973) is an author best known for popularizing the concept of "the golden circle" and to "Start With Why", described by TED as "a simple but powerful model for inspirational leadership all starting with a golden circle and the question "Why?"'.

Simon joined the RAND Corporation in 2010 as an adjunct staff member, where he advises on matters of military innovation and planning. His first TEDx Talk on "How Great Leaders Inspire Action" is the 3rd most viewed video on TED.com.

His 2009 book on the same subject, Start With Why: How Great Leaders Inspire Everyone to Take Action (2009) delves into what he says is a naturally occurring pattern, grounded in the biology of human decision-making, that explains why we are inspired by some people, leaders, messages and organizations over others.

He has commented for The New York Times, Wall Street Journal, The Washington Post, Houston Chronicle, FastCompany, CMO Magazine, NPR, and BusinessWeek, and is a regular contributor to The Huffington Post, BrandWeek, IncBizNet.

Sinek was born in Wimbledon, England; at a young age he moved to Johannesburg, South Africa, then to London, then to Hong Kong, before settling in New Jersey.

He attended Northern Valley Regional High School at Demarest, graduating in the class of 1991. He earned a BA degree in cultural anthropology from Brandeis University; he attended City University in London with the intention of becoming a barrister, but left law school to go into advertising.

As of January 2015, his talk How Great Leaders Inspire Action was number three on the list of the twenty most popular TED talks of all time.The talk was filmed at TEDxPuget Sound in September 2009.

In October 2009, he released his book “Start with Why: How Great Leaders Inspire Everyone to Take Action”, and in December 2011, the book topped the list of best sellers for corporate America according to 800-CEO-READ.