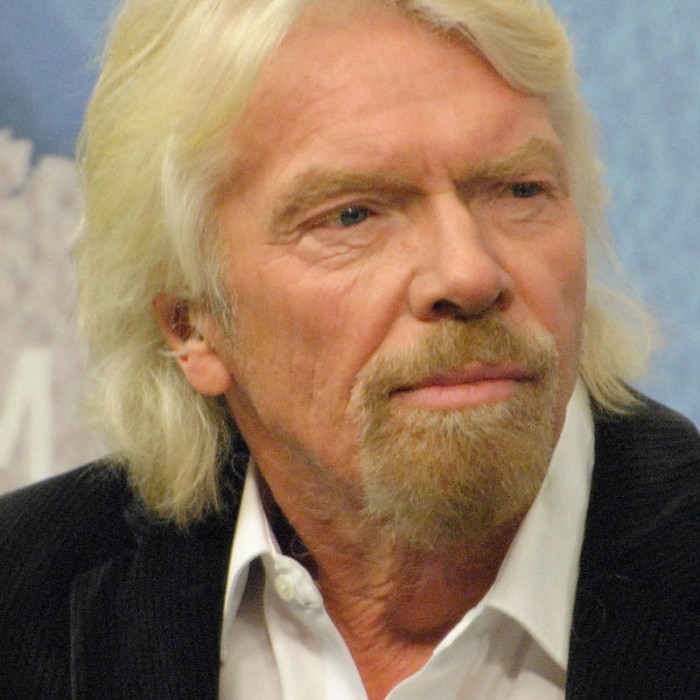 Branson expressed his desire to become an entrepreneur at a young age. At the age of sixteen his first business venture was a magazine called Student. In 1970, he set up a mail-order record business.

In 1972, he opened a chain of record stores, Virgin Records, later known as Virgin Megastores. Branson's Virgin brand grew rapidly during the 1980s, as he set up Virgin Atlantic airline and expanded the Virgin Records music label.

In March 2000, Branson was knighted at Buckingham Palace for "services to entrepreneurship". For his work in retail, music and transport (with interests in land, air, sea and space travel), his taste for adventure, and for his humanitarian work, he became one of the most prominent figures in British culture.

Branson appears at No. 85 on the 2002 list of 100 Greatest Britons on the BBC and voted for by the public. Branson was also ranked in 2007's Time magazine "Top 100 Most Influential People in the World".

On 7 December 2007, United Nations Secretary General Ban Ki-Moon presented Branson with the United Nations Correspondents Association Citizen of the World Award for his support for environmental and humanitarian causes.

In 2009, Branson was voted the UK's "Celebrity Dream Boss" in an opinion poll by Cancer Research UK. On 24 January 2011, Branson was awarded the German Media Prize (organised by "Media Control Charts"), previously handed to former US president Bill Clinton and the Dalai Lama.

On 14 November 2011, Branson was awarded the ISTA Prize by the International Space Transport Association in The Hague for his pioneering achievements in the development of suborbital transport systems with "Virgin Galactic".[120] On 11 February 2012, Branson was honoured with the National Academy of Recording Arts and Sciences' President's Merit Award for his contributions to the music industry.

On 29 October 2015, Branson was listed by UK-based company Richtopia at number 1 in the list of 100 Most Influential British Entrepreneurs. In October 2015, Branson received the International Crisis Group Chairman's Award at the United Nations Development Programme's In Pursuit of Peace Awards Dinner.