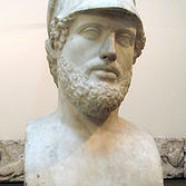 Pericles . 495 – 429 BC was a prominent and influential Greek statesman, orator and general of Athens during the Golden Age—specifically the time between the Persian and Peloponnesian wars.

He was descended, through his mother, from the powerful and historically influential Alcmaeonid family. Pericles had such a profound influence on Athenian society , a contemporary historian, acclaimed him as "the first citizen of Athens".

Pericles turned the Delian League into an Athenian empire, and led his countrymen during the first two years of the Peloponnesian War.