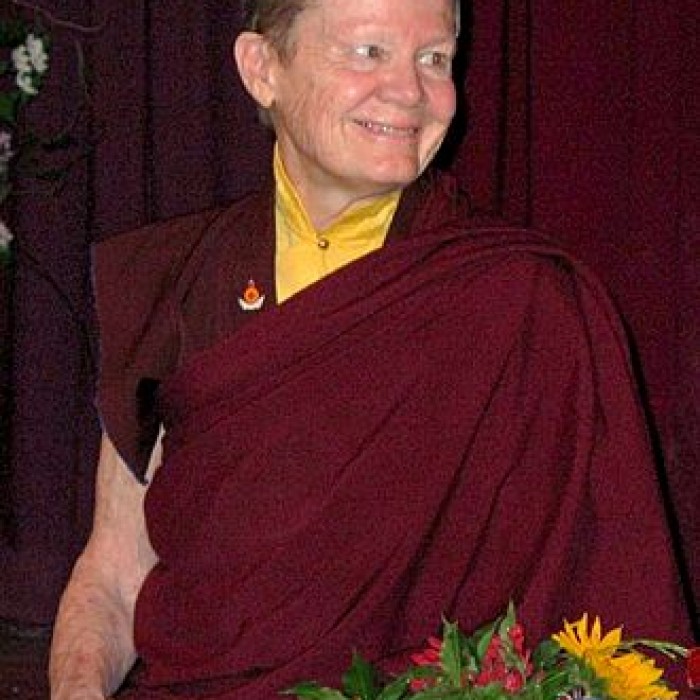 Pema Chödrön (born Deirdre Blomfield-Brown July 14, 1936) is an American Tibetan Buddhist. She is an ordained nun, acharya and disciple of Chögyam Trungpa Rinpoche.Chodron has written several books and is the director of the Gampo Abbey in Nova Scotia, Canada.

Chödrön was born Deirdre Blomfield-Brown in 1936 in New York City.She attended Miss Porter's School in Farmington, Connecticut and grew up on a New Jersey farm with an older brother and sister.She obtained a bachelor's degree in English literature and a master’s in elementary education from the University of California, Berkeley.

Chödrön began studying with Lama Chime Rinpoche during frequent trips to London over a period of several years. While in the US she studied with Trungpa Rinpoche in San Francisco.In 1974, she became a novice Buddhist nun under Rangjung Rigpe Dorje the sixteenth Gyalwa Karmapa. In Hong Kong in 1981 she became the first American in the Vajrayana tradition to become a fully ordained nun or bhikṣuṇī.

Trungpa appointed Chödrön director of the Boulder Shambhala Center (Boulder Dharmadhatu) in Colorado in the early 1980s. Chödrön moved to Gampo Abbey in 1984, the first Tibetan Buddhist monastery in North America for Western men and women, and became its first director in 1986. Chodron's first book, The Wisdom of No Escape, was published in 1991. Then, In 1993, she was given the title of acharya when Trungpa's son, Sakyong Mipham Rinpoche, assumed leadership of his father's Shambhala lineage.

In 1994, she became ill with chronic fatigue syndrome but gradually her health improved. During this period, she met Dzigar Kongtrul Rinpoche and took him as her teacher. That year she published her second book, Start Where You Are and in 1997 her book, When Things Fall Apart. No Time to Lose, a commentary on Shantideva's Guide to the Bodhisattva's Way of Life, was published in 2005.That year, Chödrön became a member of The Committee of Western Bhikshunis.Her most recent book, Practicing Peace in Times of War, came out in 2006.In 2016 she was awarded the Global Bhikkhuni Award, presented by the Chinese Buddhist Bhikkhuni Association of Taiwan.

Chödrön teaches the traditional "Yarne"retreat at Gampo Abbey each winter and the Guide to the Bodhisattva's Way of Life in Berkeley each summer.A central theme of her teaching is the principle of "shenpa", or "attachment", which she interprets as the moment one is hooked into a cycle of habitual negative or self-destructive thoughts and actions.