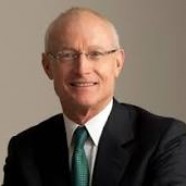 Michael Eugene Porter (born May 23, 1947) is an economist, researcher, author, advisor, speaker and teacher. Throughout his career at Harvard Business School, he has brought economic theory and strategy concepts to bear on many of the most challenging problems facing corporations, economies and societies, including market competition and company strategy, economic development, the environment, and health care.

His extensive research is widely recognized in governments, corporations, NGOs, and academic circles around the globe. His research has received numerous awards, and he is the most cited scholar today in economics and business. While Michael Porter is, at the core, a scholar, his work has also achieved remarkable acceptance by practitioners across multiple fields.

He is a leading authority on competitive strategy and the competitiveness and economic development of nations, states, and regions. Michael Porter's work is recognized in many governments, corporations and academic circles globally.

Michael Eugene Porter received a BSE with high honors in aerospace and mechanical engineering from Princeton University in 1969, where he graduated first in his class and was elected to Phi Beta Kappa and Tau Beta Pi. He received an MBA with high distinction in 1971 from Harvard Business School, where he was a George F. Baker Scholar, and a PhD in business economics from Harvard University in 1973.

At Harvard, Porter took classes in industrial organization economics, which attempts to model the effect of competitive forces on industries and their profitability. This study inspired the Porter five forces analysis framework for analyzing industries.

Porter also serves as an advisor to business, government, and the social sector. He has served as strategy advisor to numerous leading U.S. and international companies, including Caterpillar, Procter & Gamble, Scotts Miracle-Gro, Royal Dutch Shell, and Taiwan Semiconductor.

In 2000, Michael Porter was appointed a Harvard University Professor, the highest professional recognition that can be awarded to a Harvard faculty member. In 2009, he was awarded an honorary degree from McGill University.