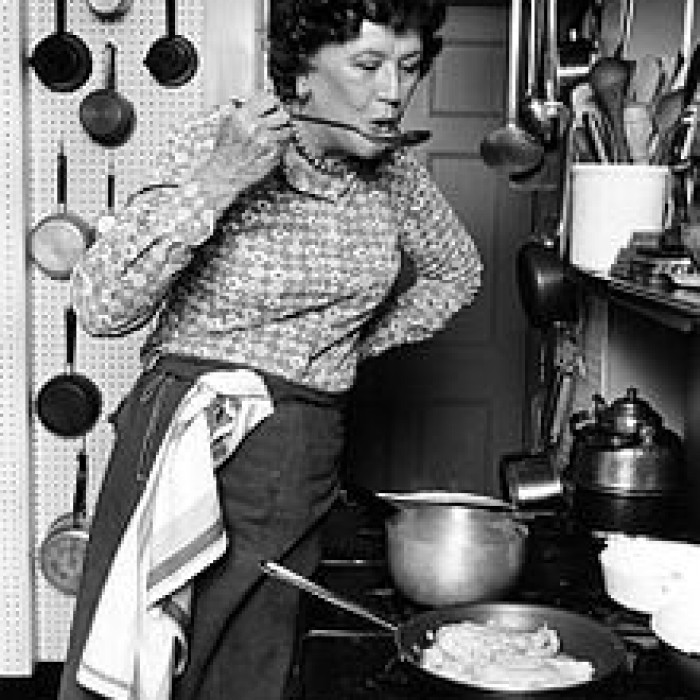 Julia Carolyn Child (August 15, 1912 – August 13, 2004) was an American chef, author and television personality. She is recognized for bringing French cuisine to the American public with her debut cookbook, Mastering the Art of French Cooking, and her subsequent television programs, the most notable of which was The French Chef, which premiered in 1963.

Julia Child had a large impact on American households and housewives. Because of the technology in the 60s, the show was unedited, causing her blunders to appear in the final version and ultimately lend "authenticity and approachability to television."

According to Toby Miller in "Screening Food: French Cuisine and the Television Palate," one mother he spoke to said that sometimes "all that stood between me and insanity was hearty Julia Child" because of Child's ability to soothe and transport her. In addition, Miller notes that Child's show began before the feminist movement of the 1960's, which meant that the issues housewives and women faced were somewhat ignored on television.

In 1995, Julia Child established The Julia Child Foundation for Gastronomy and Culinary Arts, a private charitable foundation to make grants to further her life's work. The Foundation, originally set up in Massachusetts, later moved to Santa Barbara, California, where it is now headquartered. Inactive until after Julia's death in 2004, the Foundation makes grants to other non-profits.

Child was a favorite of audiences from the moment of her television debut on public television in 1963, and she was a familiar part of American culture and the subject of numerous references, including numerous parodies in television and radio programs and skits.

Her great success on air may have been tied to her refreshingly pragmatic approach to the genre, "I think you have to decide who your audience is. If you don’t pick your audience, you’re lost because you’re not really talking to anybody. My audience is people who like to cook, who want to really learn how to do it." In 1996, Julia Child was ranked No. 46 on TV Guide's 50 Greatest TV Stars of All Time.