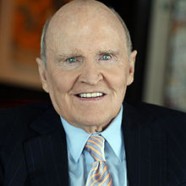 Author, Commentator, and Executive Chairman of the Jack Welch Management Institute, a business school offering an MBA at Strayer University.

John Francis "Jack" Welch, Jr. (born November 19, 1935) is author, Commentator, and Executive Chairman of the Jack Welch Management Institute, a business school offering an MBA at Strayer University. During his tenure at GE, the company's value rose 4,000%. In 2006, Welch's net worth was estimated at $720 million. When he retired from GE he took a severance payment of $417 million, the largest such payment in history.

Jack Welch was born in Peabody, Massachusetts, the son of Grace (Andrews), a homemaker, and John Francis Welch, Sr, a Boston & Maine Railroad conductor. Jack is Irish American. His paternal and maternal grandparents were Irish.

Throughout his early life in middle school and high school, Jack found work in the summers as a golf caddie, newspaper delivery boy, shoe salesman, and drill press operator. Welch attended Salem High School, where he participated in baseball, football, and captained the hockey team.

Late in his senior year, Welch was accepted to University of Massachusetts Amherst, where he studied chemical engineering.

Welch joined General Electric in 1960. He worked as a junior chemical engineer in Pittsfield, Massachusetts, at a salary of $10,500. In 1961, Welch planned to quit his job as junior engineer because he was dissatisfied with the raise offered to him and was unhappy with the bureaucracy he observed at GE.

By 1968, Welch became the vice president and head of GE's plastics division, which at the time was a $26 million operation for GE.

Welch was named senior vice president and head of Consumer Products and Services Division in 1977, a position he held until 1979 when he became the vice chairman of GE.

In 1981, Welch became GE's youngest chairman and CEO, succeeding Reginald H. Jones. By 1982, Welch had dismantled much of the earlier management put together by Jones with aggressive simplification and consolidation. One of his primary leadership directives was that GE had to be No. 1 or No. 2 in the industries it participated in.