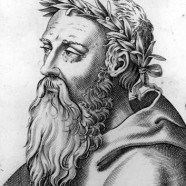 Heraclitus of Ephesus( c. 535 – c. 475 BC) was a pre-SocraticGreek philosopher, a native of the Greek city Ephesus, Ionia, on the coast of Asia Minor. He was of distinguished parentage. Little is known about his early life and education, but he regarded himself as self-taught and a pioneer of wisdom. From the lonely life he led, and still more from the apparently riddled and allegedly paradoxical nature of his philosophy and his stress upon the needless unconsciousness of humankind,he was called "The Obscure" and the "Weeping Philosopher".

Heraclitus was famous for his insistence on ever-present change as being the fundamental essence of theuniverse, as stated in the famous saying, "No man ever steps in the same river twice"(see panta rhei, below). This position was complemented by his stark commitment to a unity of opposites in the world, stating that "the path up and down are one and the same".