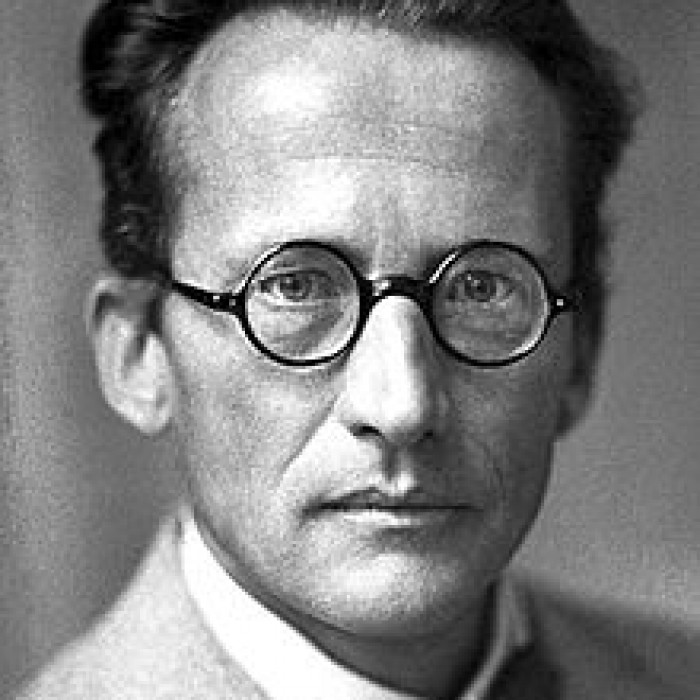 He developed a number of fundamental results in the field of quantum theory, which formed the basis of wave mechanics.

He formulated the wave equation (stationary and time-dependent Schrödinger equation) and revealed the identity of his development of the formalism and matrix mechanics. Schrödinger proposed an original interpretation of the physical meaning of the wave function.

In addition, he was the author of many works in various fields of physics: statistical mechanics and thermodynamics, physics of dielectrics, colour theory, electrodynamics, general relativity, and cosmology, and he made several attempts to construct a unified field theory.

In his book What Is Life? Schrödinger addressed the problems of genetics, looking at the phenomenon of life from the point of view of physics.

He paid great attention to the philosophical aspects of science, ancient and oriental philosophical concepts, ethics, and religion.

He also wrote on philosophy and theoretical biology. He is also known for his "Schrödinger's cat" thought-experiment.

On 12 August 1887, Schrödinger was born in Erdberg (de), Vienna, Austria, to Rudolf Schrödinger and Georgine Emilia Brenda Schrödinger. He was their only child.

He was also able to learn English outside of school, as his maternal grandmother was British.

In 1911, Schrödinger became an assistant to Exner. At an early age, Schrödinger was strongly influenced by Arthur Schopenhauer.

As a result of his extensive reading of Schopenhauer's works, he became deeply interested throughout his life in colour theory and philosophy.

In his lecture "Mind and Matter", he said that "The world extended in space and time is but our representation." This is a repetition of the first words of Schopenhauer's main work.

Between 1914 and 1918 he participated in war work as a commissioned officer in the Austrian fortress artillery (Gorizia, Duino, Sistiana, Prosecco, Vienna).

In 1920 he became the assistant to Max Wien, in Jena, and in September 1920 he attained the position of ao. Prof. (ausserordentlicher Professor), roughly equivalent to Reader (UK) or associate professor (US), in Stuttgart.

In 1927, he succeeded Max Planck at the Friedrich Wilhelm University in Berlin. In 1934, however, Schrödinger decided to leave Germany; he disliked the Nazis' anti-semitism.

He became a Fellow of Magdalen College at the University of Oxford. Soon after he arrived, he received the Nobel Prize together with Paul Dirac.

In 1938, after the Anschluss, Schrödinger had problems because of his flight from Germany in 1933 and his known opposition to Nazism.

He moved to Clontarf, Dublin, became the Director of the School for Theoretical Physics in 1940 and remained there for 17 years.

He became a naturalized Irish citizen in 1948, but retained his Austrian citizenship.

He wrote about 50 further publications on various topics, including his explorations of unified field theory.

On 6 April 1920, Schrödinger married Annemarie (Anny) Bertel. Schrödinger suffered from tuberculosis and several times in the 1920s stayed at a sanatorium in Arosa. It was there that he formulated his wave equation.

On 4 January 1961, Schrödinger died of tuberculosis, aged 73, in Vienna. He left Anny a widow, and was buried in Alpbach, Austria, in a Catholic cemetery.

Although he was not Catholic, the priest in charge of the cemetery permitted the burial after learning Schrödinger was a member of the Pontifical Academy of Sciences.

Early in his life, Schrödinger experimented in the fields of electrical engineering, atmospheric electricity, and atmospheric radioactivity.

In the first years of his career Schrödinger became acquainted with the ideas of quantum theory, developed in the works of Max Planck, Albert Einstein, Niels Bohr, Arnold Sommerfeld, and others.

The first publications of Schrödinger about atomic theory and the theory of spectra began to emerge only from the beginning of the 1920s, after his personal acquaintance with Sommerfeld and Wolfgang Pauli and his move to Germany.

In January 1921, Schrödinger finished his first article on this subject, about the framework of the Bohr-Sommerfeld effect of the interaction of electrons on some features of the spectra of the alkali metals.

In autumn 1922 he analyzed the electron orbits in an atom from a geometric point of view, using methods developed by the mathematician Hermann Weyl (1885–1955).

In January 1926, Schrödinger published in Annalen der Physik the paper "Quantisierung als Eigenwertproblem" on wave mechanics and presented what is now known as the Schrödinger equation.

Schrödinger was not entirely comfortable with the implications of quantum theory. Schrödinger wrote about the probability interpretation of quantum mechanics, saying: "I don't like it, and I'm sorry I ever had anything to do with it."

In 1947, he announced a result, "Affine Field Theory," in a talk at the Royal Irish Academy, but the announcement was criticized by Einstein as "preliminary" and failed to lead to the desired unified theory.

Schrödinger's portrait was the main feature of the design of the 1983–97 Austrian 1000-Schilling banknote, the second-highest denomination.

A building is named after him at the University of Limerick, in Limerick, Ireland, as is the 'Erwin Schrödinger Zentrum' at Adlershof in Berlin.

The large crater Schrödinger, on the far side of the Moon, is named after him. The Erwin Schrödinger International Institute for Mathematical Physics was established in Vienna in 1993.