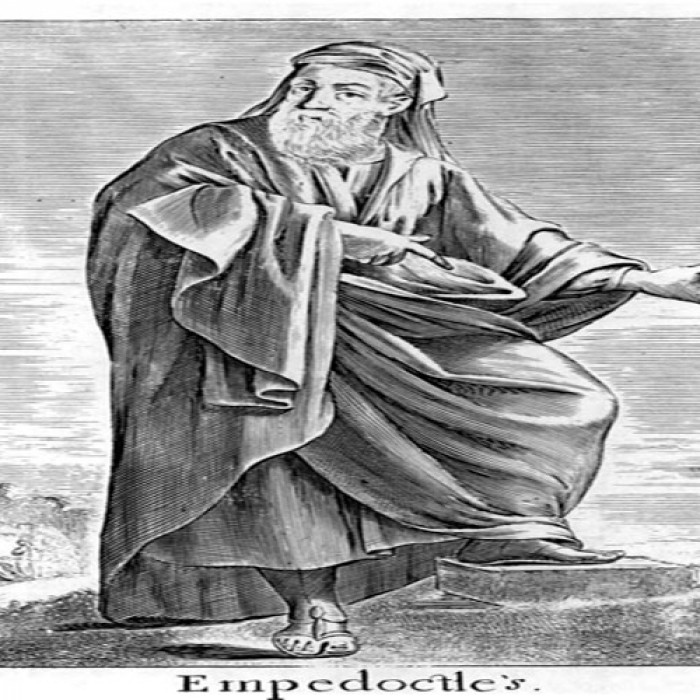 Empedocles (c. 490 – c. 430 BC) was a Greek pre-Socratic philosopher and a citizen of Acragas (Agrigentum), a Greek city in Sicily.

Empedocles' philosophy is best known for originating the cosmogenic theory of the four classical elements.

He also proposed forces he called Love and Strife which would mix as well as separate the elements.

These physical speculations were part of a history of the universe which also dealt with the origin and development of life.

Influenced by the Pythagoreans, Empedocles was a vegetarian who supported the doctrine of reincarnation.

He is generally considered the last Greek philosopher to have recorded his ideas in verse.

Some of his work survives, more than is the case for any other pre-Socratic philosopher.

Empedocles' death was mythologized by ancient writers, and has been the subject of a number of literary treatments.

Empedocles was born, c. 490 BC, at Acragas (Agrigentum) in Sicily to a distinguished family.

Empedocles continued this tradition by helping to overthrow the succeeding oligarchic government.

His brilliant oratory, his penetrating knowledge of nature, and the reputation of his marvellous powers, including the curing of diseases, and averting epidemics, produced many myths and stories surrounding his name.

He was said to have been a magician and controller of storms, and he himself, in his famous poem Purifications seems to have promised miraculous powers, including the destruction of evil, the curing of old age, and the controlling of wind and rain.

Empedocles was acquainted or connected by friendship with the physicians Pausanias (his eromenos) and Acron; with various Pythagoreans; and even, it is said, with Parmenides and Anaxagoras.

Empedocles is considered the last Greek philosopher to write in verse and the surviving fragments of his teaching are from two poems, Purifications and On Nature.

Empedocles explains not only the nature and history of the universe, including his theory of the four classical elements, but he describes theories on causation, perception, and thought, as well as explanations of terrestrial phenomena and biological processes.

Empedocles established four ultimate elements which make all the structures in the world—fire, air, water, earth.

Empedocles called these four elements "roots", which he also identified with the mythical names of Zeus, Hera, Nestis, and Aidoneus.

Empedocles is credited with the first comprehensive theory of light and vision. He put forward the idea that we see objects because light streams out of our eyes and touches them.

In a famous fragment, Empedocles attempted to explain the phenomena of respiration by means of an elaborate analogy with the clepsydra or water clock, an ancient device for transmitting liquids from one vessel to another.

In 2006, a massive underwater volcano off the coast of Sicily was named Empedocles.

Diogenes Laërtius records the legend that Empedocles died by throwing himself into Mount Etna in Sicily, so that the people would believe his body had vanished and he had turned into an immortal god.

Empedocles' death is the subject of Friedrich Hölderlin's play Tod des Empedokles (The Death of Empedocles), two versions of which were written between the years 1798 and 1800.

A third version was made public in 1826. In Matthew Arnold's poem Empedocles on Etna, a narrative of the philosopher's last hours before he jumps to his death in the crater first published in 1852.