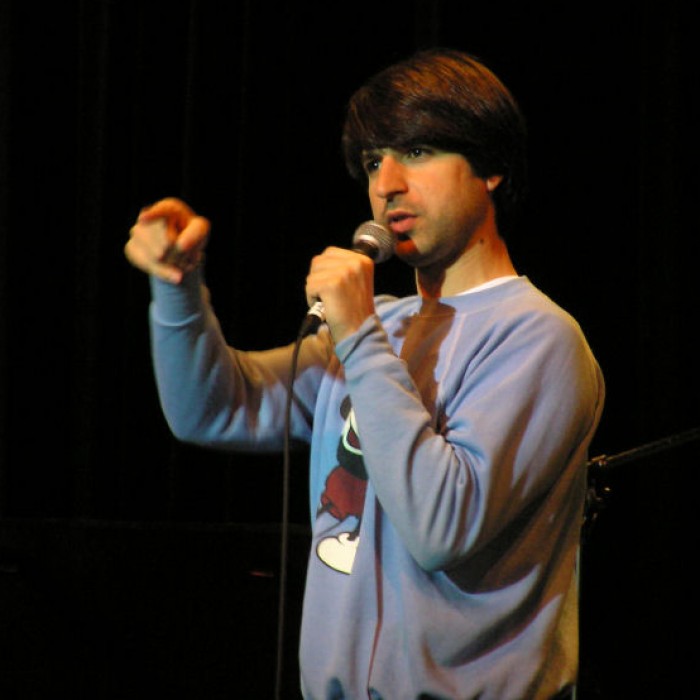 Demetri Evan Martin (born May 25, 1973) is an American comedian, actor, artist, musician, writer, and humorist. He is best known for his work as a stand-up comedian, being a contributor on The Daily Show, and his Comedy Central show Important Things with Demetri Martin.

In 2001, Martin caught his first big break in stand-up comedy when he appeared on Comedy Central's stand-up showcase Premium Blend. At the 2003 Edinburgh Festival Fringe he won the Perrier award with his show If I.... The show was turned into a BBC television special in 2004. From 2003 to 2004, Martin wrote for Late Night with Conan O'Brien. In 2004, Martin had his own Comedy Central Presents stand-up special. His special was divided into three parts. In the first, he performed in traditional stand-up comedy fashion.

In the second segment, he used humorous drawings as visual aids, which would serve either as the punchline or a background. During the third segment, he played a guitar and put on a pseudo-play where he would strum his guitar while alternating between playing harmonica and talking; some of his comedian friends dressed as fairies and dragons acted according to the story he was telling, detailing the magical land from where his jokes came. Martin's mother and grandmother also appeared.

Starting in late 2005, he was credited as a contributor on The Daily Show, on which he appeared as the named "Senior Youth Correspondent" and hosted a segment called "Trendspotting". He used this segment to talk about so-called hip trends among youth such as hookahs, wine, guerilla marketing and Xbox 360. A piece about social networking featured his profile on MySpace.

On March 22, 2007, Martin made another appearance on The Daily Show, talking about the Viacom lawsuit against Google and YouTube. He is no longer a Daily Show contributor as of 2014.

He has recorded a comedy album titled These Are Jokes, which was released on September 26, 2006. This album also features Saturday Night Live member Will Forte and stand-up comedian Leo Allen. Martin returned to The Daily Show on March 22, 2006, as the new Youth Correspondent, calling his segment "Professional Important News with Demetri Martin".

In 2007, he starred in a Fountains of Wayne music video for "Someone to Love" as Seth Shapiro, a character in the song. He also starred in the video for the Travis single "Selfish Jean", in which he wears multiple T-shirts with lyrics written on them. On September 2, 2007, Martin appeared on the season finale of the HBO series Flight of the Conchords. He appeared as a keytar player named Demetri.

He also had a part in the movie The Rocker (2008) starring Rainn Wilson. Martin played the part of the videographer when the band in the movie was making their first music video.