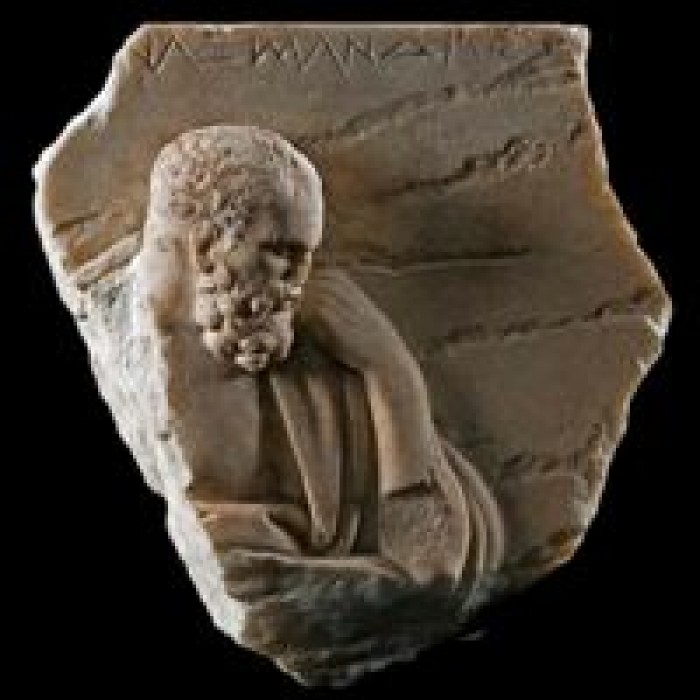 Anaximander (c. 610 – c. 546 BC) was a pre-Socratic Greek philosopher who lived in Miletus, a city of Ionia (in modern-day Turkey).

He belonged to the Milesian school and learned the teachings of his master Thales.

He succeeded Thales and became the second master of that school where he counted Anaximenes and, arguably, Pythagoras amongst his pupils.

According to available historical documents, he is the first philosopher known to have written down his studies, although only one fragment of his work remains. Fragmentary testimonies found in documents after his death provide a portrait of the man.

He was an early proponent of science and tried to observe and explain different aspects of the universe, with a particular interest in its origins, claiming that nature is ruled by laws, just like human societies, and anything that disturbs the balance of nature does not last long.

In astronomy, he attempted to describe the mechanics of celestial bodies in relation to the Earth.

In physics, his postulation that the indefinite (or apeiron) was the source of all things led Greek philosophy to a new level of conceptual abstraction.

His knowledge of geometry allowed him to introduce the gnomon in Greece. He created a map of the world that contributed greatly to the advancement of geography.

He was also involved in the politics of Miletus and was sent as a leader to one of its colonies.

Anaximander, son of Praxiades, was born in the third year of the 42nd Olympiad (610 BC).

According to Apollodorus of Athens, Greek grammarian of the 2nd century BC, he was sixty-four years old during the second year of the 58th Olympiad (547–546 BC), and died shortly afterwards.

Anaximander's theories were influenced by the Greek mythical tradition, and by some ideas of Thales – the father of philosophy – as well as by observations made by older civilizations in the East (especially by the Babylonian astrologers).

Anaximander was the first to conceive a mechanical model of the world. In his model, the Earth floats very still in the centre of the infinite, not supported by anything.

Anaximander was the first astronomer to consider the Sun as a huge mass, and consequently, to realize how far from Earth it might be, and the first to present a system where the celestial bodies turned at different distances.

Anaximander attributed some phenomena, such as thunder and lightning, to the intervention of elements, rather than to divine causes.

Anaximander speculated about the beginnings and origin of animal life.

In his philosophical work De Divinatione (I, 50, 112), Cicero states that Anaximander convinced the inhabitants of Lacedaemon to abandon their city and spend the night in the country with their weapons because an earthquake was near.