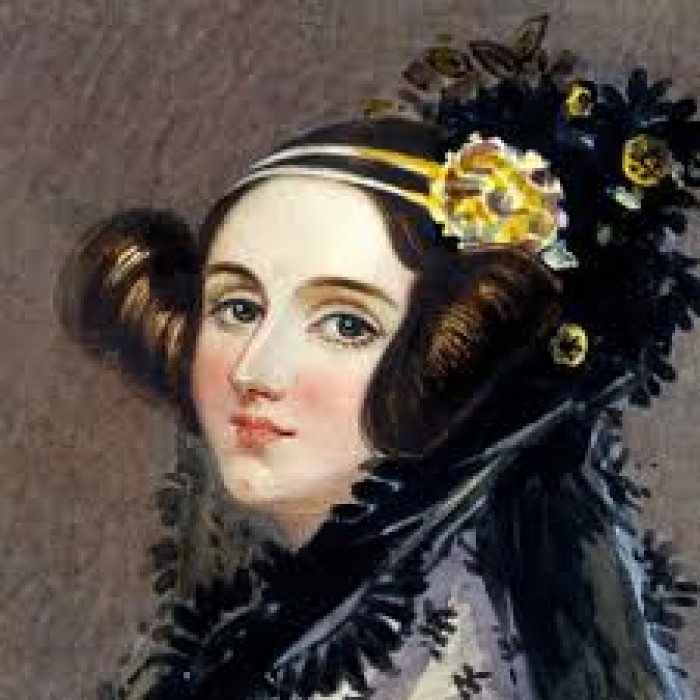 Augusta Ada King-Noel, Countess of Lovelace  was an English mathematician and writer, chiefly known for her work on Charles Babbage's early mechanical general-purpose computer, the Analytical Engine. Her notes on the engine include what is recognized as the first algorithm intended to be carried out by a machine. As a result, she is often regarded as the first computer programmer.

Ada Lovelace was the only legitimate child of the poet George, Lord Byron, and his wife Anne Isabella Milbanke ("Annabella"), Lady Wentworth. All Byron's other children were born out of wedlock to other women. Byron separated from his wife a month after Ada was born and left England forever four months later, eventually dying of disease in the Greek War of Independence when Ada was eight years old.

Her educational and social exploits brought her into contact with scientists such as Andrew Crosse, Sir David Brewster, Charles Wheatstone, Michael Faraday and the author Charles Dickens, which she used to further her education. Ada described her approach as poetical science and herself as an "Analyst (& Metaphysician)".

On 16 January 1816 Annabella, at Byron's behest, left for her parents' home at Kirkby Mallory taking one-month-old Ada with her. On 21 April Byron signed the Deed of Separation, although very reluctantly, and left England for good a few days later. Aside from an acrimonious separation, Annabella continually made allegations about Byron's immoral behaviour throughout her life.

Throughout her illnesses, she continued her education. Her mother's obsession with rooting out any of the insanity of which she accused Byron was one of the reasons that Ada was taught mathematics from an early age. She was privately schooled in mathematics and science by William Frend, William King, and Mary Somerville, the noted researcher and scientific author of the 19th century. One of her later tutors was the mathematician and logician Augustus De Morgan.

Lovelace died at the age of 36 – the same age that her father had died – on 27 November 1852, from uterine cancer probably exacerbated by bloodletting by her physicians. The illness lasted several months, in which time Annabella took command over whom Ada saw, and excluded all of her friends and confidants. Under her mother's influence, she had a religious transformation and was coaxed into repenting of her previous conduct and making Annabella her executor.

Ada Lovelace's notes were labelled alphabetically from A to G. In note G, she describes an algorithm for the Analytical Engine to compute Bernoulli numbers. It is considered the first published algorithm ever specifically tailored for implementation on a computer, and Ada Lovelace has often been cited as the first computer programmer for this reason. The engine was never completed so her program was never tested.