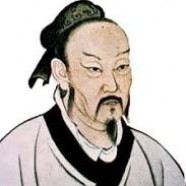 Zhuang Zhou, often known as Zhuangzi ("Master Zhuang") was an influential Chinese philosopher who lived around the 4th century BC during the Warring States period, a period corresponding to the summit of Chinese philosophy, the Hundred Schools of Thought. He is credited with writing—in part or in whole—a work known by his name, the Zhuangzi, which expresses a philosophy of skepticism, arguing[citation needed] that life is limited and knowledge to be gained is unlimited.