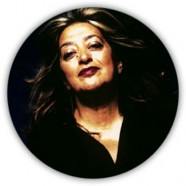 -Zaha Hadid (born 31 October, 1950) was an Iraqi-born British architect. In her career she realized several performance and a lot of  work let us give a level intelectual very successful.

-She was the first women receiving the Pritzker Arcitecture Prize in 2004 ;she also received the stirling prize in 2010 and 2011 .

-In2012 , she was created a Dame commander  of the Order of the British Empire ; In 2015 she became the first women to be awarded the Riba Gold Medal in the own right .

-She made  several news technique like sweeping fluid of multiple  perspective points and fragmented geometry that evoke the chaos and flux of modern life, she also liberated architectural geometry with  the creation highly expressive and an icon   of neo-futurisme with a formidable personality