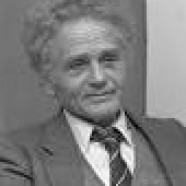 Yuri Orlov was born into a working-class family on 13 August 1924 and grew up in a village near Moscow. His parents were Klavdiya Petrovna Lebedeva and Fyodor Pavlovich Orlov.

Yrom 1944 to 1946, Orlov served as an officer in the Soviet army. In 1952, he graduated from the Moscow State University and began his postgraduate studies at the Institute for Theoretical and Experimental Physics where he later worked as a physicist.