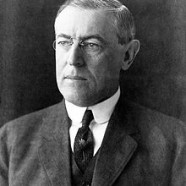 Woodrow Wilson, born on December 28, 1856, in Staunton, Virginia, spent his youth in the South, as the son of a devout Presbyterian family, seeing the ravages of the Civil War and its aftermath. A dedicated scholar and enthusiastic orator, he earned multiple degrees before embarking on a university career. In a fast rise politically, he spent two years as governor of New Jersey before becoming the two-term 28th president of the United States in 1912. Wilson saw America through World War I, negotiating the Versailles Treaty and crafting a League of Nations, a precursor to the United Nations. He suffered his second stroke during the last year of his presidency and died three years after leaving office, on February 3, 1924, with sweeping reforms for the middle class, voting rights for women and precepts for world peace as his legacy.