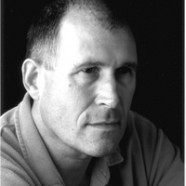 William Benedict Nicholson, OBE, FRSL(born 12 January 1948) is a British screenwriter, playwright, and novelist who has been nominated twice for an Oscar. At the start of his career Nicholson worked for the BBC as a director of documentary films with numerous works to his credit between the mid-1970s and mid-1980s. He gained renown as a novelist and playwright when the first book of his popular Wind On Fire trilogy won the Blue Peter best book award and the Smarties Gold Award for best children's book. He has written several novels and fantasy books.