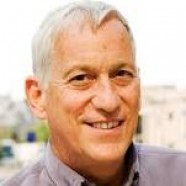 Walter Isaacson is an American writer and journalist. He is the President and CEO of the Aspen Institute, a nonpartisan educational and policy studies organization based in Washington, D.C. He has been the chairman and CEO of Cable News Network (CNN) and the Managing Editor of Time. He has written biographies of Steve Jobs, Benjamin Franklin, Albert Einstein, and Henry Kissinger.

Isaacson was born on May 20, 1952 in New Orleans, Louisiana, the son of Irwin and Betty Lee Isaacson. His father was an engineer and his mother was a real estate broker.

Isaacson attended New Orleans' Isidore Newman School, where he was student body president. He attended a summer at Deep Springs College for the Telluride Association Summer Program (TASP) before enrolling at Harvard University in 1974, where he earned a B.A. degree in history and literature.

At Harvard, Isaacson was the president of the Signet Society, a member of the Harvard Lampoon, and a resident of Lowell House.

He then attended the University of Oxford in the UK as a Rhodes scholar at Pembroke College, where he read Philosophy, Politics, and Economics (PPE).

Isaacson began his career in journalism at The Sunday Times of London, followed by a position with the New Orleans Times-Picayune. He joined Time magazine in 1978, serving as the magazine's political correspondent, national editor, and editor of new media before becoming the magazine's 14th editor in 1996.

Isaacson became chairman and CEO of CNN in July 2001. Shortly after his appointment at CNN, Isaacson attracted attention for seeking the views of Republican party leaders on Capitol Hill regarding criticisms that CNN broadcast content that was unfair to Republicans or conservatives.

On October 24, 2011, Steve Jobs, Isaacson's authorized biography of Apple Computer's Jobs, was published by Simon & Schuster. It became an international best-seller, breaking all records for sales of a biography. The book was based on over forty interviews with Jobs over a two-year period up until shortly before his death, and on conversations with friends, family members, and business rivals of the entrepreneur. In contrast to Isaacson's previous biographies of Einstein and Franklin, Steve Jobs was written while its subject was still alive, as was the case with his biography of Kissinger.