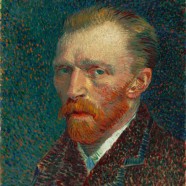 Vincent Willem van Gogh (30 March 1853 – 29 July 1890) was a Dutch Post-Impressionist painter who is among the most famous and influential figures in the history of Western art. In just over a decade he created about 2100 artworks, including around 860 oil paintings, most of them in the last two years of his life. They include landscapes, still lifes, portraits and self-portraits, and are characterised by bold, symbolic colours, and dramatic, impulsive and highly expressivebrushwork that contributed to the foundations of modern art. He sold only one painting during his lifetime and became famous after his suicide at age 37, which followed years of poverty and mental illness.