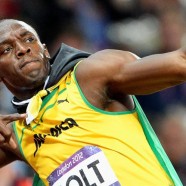 Usain St. Leo Bolt, OJ, CD (born 21 August 1986) is a Jamaican sprinter. Regarded as the fastest human ever timed, he is the first man to hold both the 100 metres and 200 metres world records since fully automatic time became mandatory. He also holds the world record as a part of the 4 × 100 metres relay.

He is the reigning World and Olympic champion in these three events. Due to his unprecedented dominance and achievements in the athletic field, he is widely considered the greatest sprinter of all time.