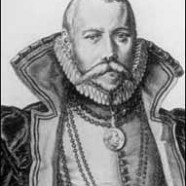 ycho Brahe (14 December 1546 – 24 October 1601), was a Danish nobleman known for his accurate and comprehensive astronomical and planetary observations.

He was born in the then Danish peninsula of Scania. Well known in his lifetime as an astronomer, astrologer and alchemist, he has been described as "the first competent mind in modern astronomy to feel ardently the passion for exact empirical facts."[His observations were some five times more accurate than the best available observations at the time.