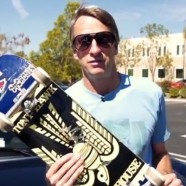 Anthony Frank "Tony" Hawk (born May 12, 1968), commonly known by his nickname "The Birdman", is an American professional skateboarder, actor, and owner of skateboard company Birdhouse. Hawk is well known for completing the first documented 900 and for his licensed video game titles, published by Activision.

He is widely considered to be one of the most successful and influential pioneers of modern vertical skateboarding.

In 2002, he created the "Boom Boom HuckJam", an extreme sports exhibition and tour that was launched in Las Vegas. Throughout his career, Hawk has made numerous appearances in films, other media, and his own series of video games.

He has also been involved in various philanthropic activities, including his own Tony Hawk Foundation that helps to build skateparks in underprivileged areas. In 2014, Hawk was named one of the most influential skateboarders of all time by FoxWeekly.