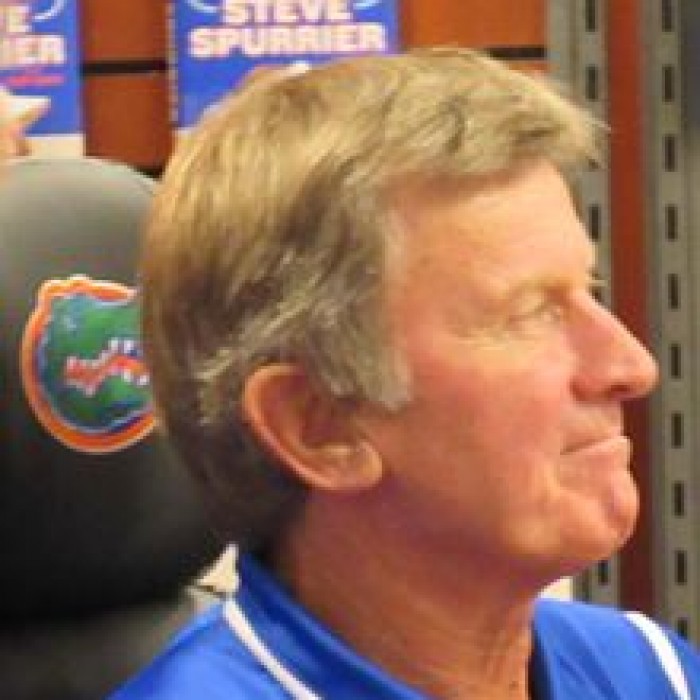 Stephen Orr Spurrier (born April 20, 1945) is a former American football player and coach. Spurrier served as the head coach of three college and two professional teams. He was also a standout college football player, and spent a decade playing professionally in the National Football League (NFL). Spurrier retired from coaching in 2015 and now serves as an ambassador and consultant for the University of Florida's athletic department. He is nicknamed the "Head Ball Coach".

Spurrier was born in Miami Beach, Florida and grew up in Tennessee, where he was a multi-sport, all-state athlete in high school. He is a graduate of the University of Florida, where he was the Florida Gators' starting quarterback for three seasons. Spurrier won the Heisman Trophy in his senior season of 1966, was a consensus All-American in both 1965 and 1966; and he was inducted into the College Football Hall of Fame as a player in 1986.

Spurrier was drafted in the first round (third overall) of the 1967 NFL draft by the San Francisco 49ers, and played mainly as a backup quarterback and punter from 1967 to 1975. In 1976, the expansion Tampa Bay Buccaneers traded for Spurrier, and he was the team's starting quarterback for most of their inaugural season.

After retiring as a player, Spurrier returned to the college game in 1978 as an offensive assistant at Florida under head coach Doug Dickey. Dickey and his entire staff were fired after the season, and Spurrier served as the quarterbacks coach at Georgia Tech in 1979 under head coach Pepper Rodgers, who was also fired after the season. At his first two coaching stops, Spurrier had been primarily a position coach without play calling responsibilities.

In 1980, Duke University head coach Red Wilson hired Spurrier as his offensive coordinator. His squads were seldom as talented as their opposition, so Spurrier created an innovative pass-based offensive system that broke several school and conference records over his three seasons as an assistant at the school. When asked in later years how he developed his offense, Spurrier has often stated that he "learned it all at Duke University."

In 1983, Spurrier accepted his first head coaching position with the Tampa Bay Bandits of the United States Football League (USFL), making him the youngest head coach in professional football at 37 years old. The Bandits had a successful run, going 35-19 over three seasons, and Spurrier's "Bandit Ball" offense was popular with fans. However, the team folded along with the rest of the USFL after the 1985 season.

Spurrier returned to Duke University as the Blue Devils' head coach in 1987, and his "Fast Break" offense broke many of the records set during his tenure as offensive coordinator. Spurrier's 1989 Duke squad won the program's first conference championship since 1962 and most recent to date.

In 1990, Spurrier returned to the University of Florida to become the Gators' head coach. For the next twelve seasons, he led Florida's program to unprecedented success, including Florida's first six Southeastern Conference (SEC) championships and first consensus national championship in 1996. His wide-open offensive scheme (re-nicknamed the "Fun 'n' Gun") continued to produce at Florida, and his squads and individual players set numerous school and conference records. In 1996, Spurrier became the first Heisman Trophy winner to coach a Heisman Trophy winner when Florida quarterback Danny Wuerffel won the award.

Spurrier unexpectedly left Florida immediately after the 2001 season to try coaching in the NFL, but had a largely disappointing tenure as the head coach of the Washington Redskins and resigned after two seasons.

In 2005, he returned to the college game as the head coach of the South Carolina Gamecocks. While his offenses were not as prolific as they had been at Florida, Spurrier similarly brought the South Carolina program to unprecedented levels of success, leading the Gamecocks to three of the four 10-win seasons in program history, as well as the school's only 11-win seasons, top-10 poll finishes, and its only SEC Championship Game appearance. On October 12, 2015, Spurrier announced that he was resigning as South Carolina's head coach, effective immediately, stating that he felt that the program was going in the wrong direction and it was time to "fire myself".

Spurrier retired as the winningest coach in both Florida and South Carolina history, and has the second most coaching wins in the history of the SEC behind only Bear Bryant. He was inducted into the College Football Hall of Fame as a coach in 2017, making him one of four members to be inducted as both a player and a coach.

In July 2016, Spurrier returned to the University of Florida as an ambassador and consultant to the athletic department. In September 2016, UF officially changed the name of the Gators' home field to Steve Spurrier-Florida Field at Ben Hill Griffin Stadium.