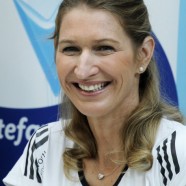 Her 22 singles titles, tied with Serena Williams, marks the joint record for most Major wins by a tennis player (male or female) since the introduction of the Open Era in 1968 and is second all-time behind Margaret Court (24).

In 1988, she became the first and only tennis player (male or female) to achieve the Golden Slam by winning all four Grand Slam singles titles and the Olympic gold medal in the same calendar year,furthermore, she is the only tennis player to have won each Grand Slam event at least 4 times.