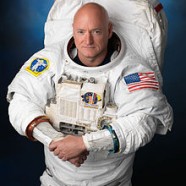 Scott Joseph Kelly (born February 21, 1964) is an American astronaut, engineer and a retired U.S. Navy Captain. A veteran of three previous missions, Kelly was selected along with Mikhail Korniyenko in November 2012 for a special year-long mission to the International Space Station.

He was Commander of the International Space Station on the one year mission until February 29, 2016, when he passed control to Timothy Kopra. In October 2015, he set the record for the total number of days spent in space by an American astronaut, 382. Kelly spent 340 consecutive days in space.